if you ask me what my most favourite Finnish bun is, i would say, without a doubt: shrove bun! (laskiaispulla in Suomi.)

here’s a little fact about it. Shrove Tuesday, or laskiainen in Suomi, is a day in February or March preceding Ash Wednesday, and people in other countries might celebrate it by consuming pancakes, which is why its other name is Pancake day. it’s supposedly the last day of gorging/eating till you just can’t eat anymore, so we are all allowed to gain an undisclosed amount of fat. 😀

well, that’s what the shrove bun is all about: FAT.

up to this year’s Shrove Tuesday, i’ve always only bought ready-made shrove buns from the supermarkets & cafes. they’re always rather pricey, so i could usually only afford 2, which means one for me and one for my husband. in a way i guess it’s good because we don’t get too much fat. :p

but this year, when i was talking about getting some shrove buns, my co-worker J said that i should just make my own. remembering how well i’ve managed to make cinnamon buns aka korvapuusti, i decided to accept the challenge!

so basically i did the same mix of ingredients as what i used for the cinnamon buns, minus the cinnamon powder.

there, the buns are done! after letting it cool down, it’s time to part each bun to two, and add the fat! the most common shrove buns here are usually filled with either raspberry jam or almond paste (plus whipped cream). my fave is the raspberry jam version, so that’s what i added. 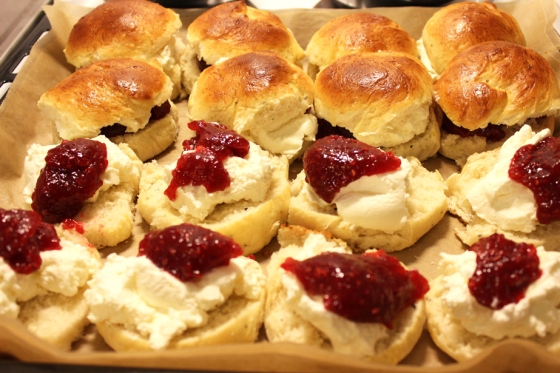 ahem, yes, i might have added a little bit too much of the jam. my husband said “that’s the most raspberry jam i’ve ever eaten–EVER–in a bun!”. well, but i don’t think he minded eating them. 😉

for the whipped cream, i used whipping cream (kuohukerma) and had my husband help me to whip it. this was my very first time seeing how it’s done (yes, you heard me right, i had never whipped creams before, nor have i seen it done, live), and i have to tell you… it’s like MAGIC! first it’s all liquidy and then you add a small amount of sugar and whip it… and ta-daaah! it’s suddenly all puffy and solid (well, almost) and it doesn’t turn back into its liquidy form! amazing!

back to the buns. after the filling, it’s time to put the heads back on and sprinkle the sugar for topping. usually people use sugar crystals for it, but i like icing sugar better. plus it’s the only one i had at home, so icing sugar it was! 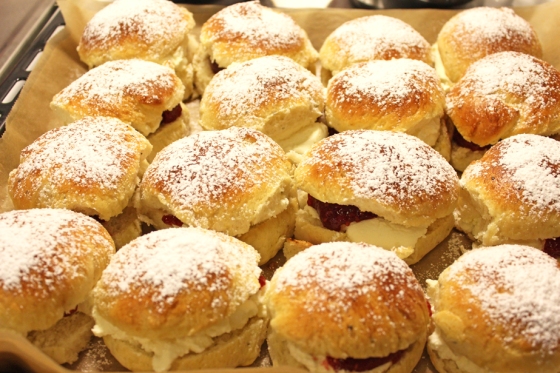 now tell me how fatty those buns look? VERY. yep. time to eat them!

three days after i made them, they were all gone. all 16 buns of them! phew. i think i can live without shrove buns for a while now. that is, until my craving for fat comes kicking in.

BONUS: all the while i made these buns and ate them, i couldn’t help whistling this tune from Eddie Cantor’s “Makin’ Whoopee”. so here’s that song for you to listen to, just for fun! (this version is arranged by Silvio Blonde & His Invisible Orchestra.)

for the past few years it seems that almost right before my birthday, i would learn something new. last year it was learning how to bike. this year it was baking.

these are perhaps originally called Mexican buns, but since i found out about it when i was still living in my home country from a famous Malaysian bakery called Rotiboy, i always call it by that name, Rotiboy buns. it’s basically a buttery bun with coffee-flavoured topping. i found the recipe here.

i felt quite intimidated when i saw the ingredients and the fact that the recipe has so many steps of instructions to follow, but decided to do it anyway. i didn’t add the ice cubes, liquid honey, vital wheat gluten, and only used half of the amount of eggs needed, and yet they still turned out so good, it felt like a miracle. 🙂 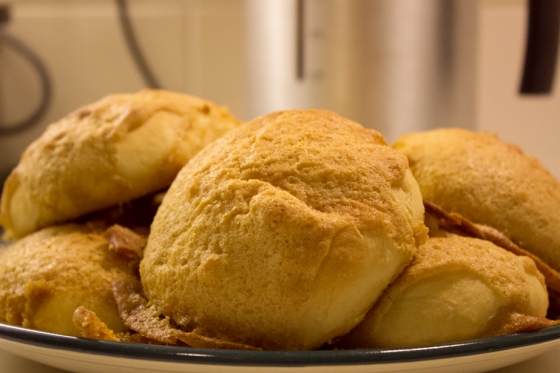 i still have to learn to put the topping more evenly so that the result would be more smooth, and also i would probably put less sugar to the topping (i put caster sugar to the topping instead of icing sugar). but all in all, the taste was so much like what i have known and loved from the original Rotiboy buns, and i was so happy that my husband loves these buns i made, too.

the second baking project was a bit less successful. i wanted to make ensaymada, a Filipino bun that i used to eat when i was in middle school. what i remember from it was that it was soft, buttery with lots of cheese on the top. i found numerous recipes for it and decided to somewhat combine this and this.

somewhere in the middle of preparing the dough, i felt like it was such a waste to use so many egg yolks (and especially since i couldn’t find any use for the egg whites, which meant i had to throw them away), so i again cut the eggs down to about half of what the second recipe said.

i guess that’s where my mistake was, because even though the dough looked perfect, and everything felt smooth sailing, when i took them out after baking them in the oven, they looked nothing like the pics of those recipes. they were so dry from the inside, and of course the outside too (i guess it got a bit burnt).

sorry for the messy pictures, i was a bit disappointed with the result that i only half-heartedly took these pics. and of course, obviously, i still have to learn how to make them look nice, like how to roll them and knot them nicely, etc.

anyway, apart from the fact that they were so dry, the taste was okay. i could use a bit more butter + grated cheese for the topping, but for the first attempt i guess it wasn’t so bad that i had to throw them all away to the trashcan.

i hope i will still have the desire to keep baking after the holiday is over. or the time to do it (since my other hobby, sewing, also needs a lot of time). it just feels nice to be able to do something in the kitchen other than cooking. but anyway, i’m glad i took the time to ‘learn’ these on this summer holiday, all before i turned 32. 🙂