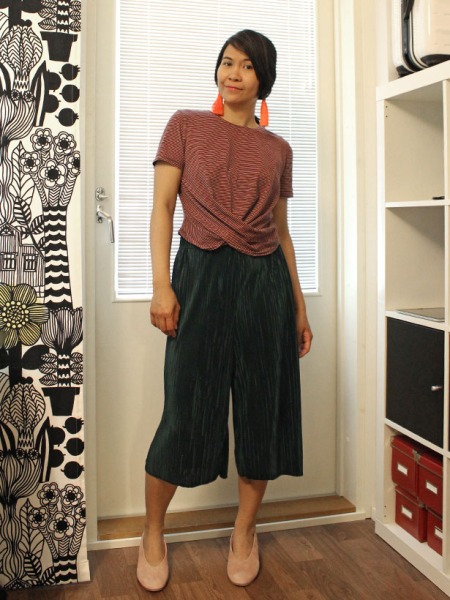 i’m talking about the fact that i am still making culottes after all these years. i can’t seem to stop myself, they’re just the easiest things to wear. ❤ 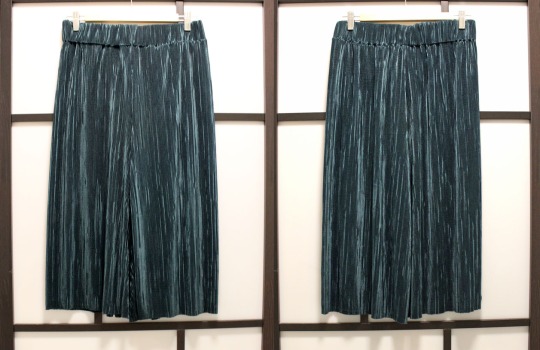 this was my third encounter of the pleated kind… i mean, pleated fabric. the first one was pleated tulle so i didn’t need to think of how to finish the hem on that one, but the second one–pleated chiffon–was quite a nightmare to work with. so i thought i would never, ever, work with pleated fabrics ever again.

inner seam as the only seam on the sides and selvedge as the hem. 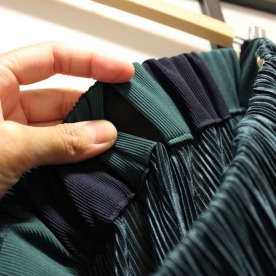 it all went down the drain when the ‘pleated trousers’ trend came around. as usual, at first i was not interested at all…. but as i kept seeing them over and over again, every where i looked, and then i came across a beautiful green pleated fabric…. my heart melted like warm butter. 😅

so i braved myself to do it, with the least possible work and pain & suffering. here’s the cheat sheet. (no step by step pictures cause i was in a hurry to finish these culottes, honestly, who has time to take pictures???)

the pleated fabrics are usually sold with pleats going sideways (from selvedge to selvedge), so if you want to have the pleats going vertically on your finished garment, remember to buy the fabric according to the width that you want to go for. in my case, the fabric was about 150 cm wide; since i only wanted culottes (not full-length trousers), half of the fabric’s width is enough for the length of the culottes. so all i needed to get of the fabric was the width i wanted for 1 leg. that was about 80-90 cm.

then i folded the fabric ‘sideways’ to two (selvedges together) and put a pattern of any pants i could find on top of it. i only needed the crotch yokes from this pattern, but since i wanted the culottes to be quite loose i used the crotch yokes from Burda pattern no. 7688. i put the back and front patterns side by side and cut the fabric as a whole leg piece ( = not separating the back and front anymore). this way i wouldn’t have to sew the sides and risk the pleats not being matched. cut the part where the fabric was folded, this would be the waist part of the culottes.

so i got 2 pieces now, the right leg piece and the left leg piece. the hem of the culottes is where the selvedge is, so there would be no need to think of how to finish it!

since i only had elastic band which is 5 cm wide left at home, i had to be quite creative with the waistband. you can do what you like at this point, but my idea was to make a tunnel and just put the elastic band in after everything was done. i didn’t want to make the culottes shorter by making the tunnel out of the self fabric, so i used a remnant of a jersey fabric for the lining of that tunnel.

as always when sewing pants of any kind, start with the inner seams of each leg parts, and then sew together the crotch yokes. then it was time for the tunnel and then put in the elastic bands. 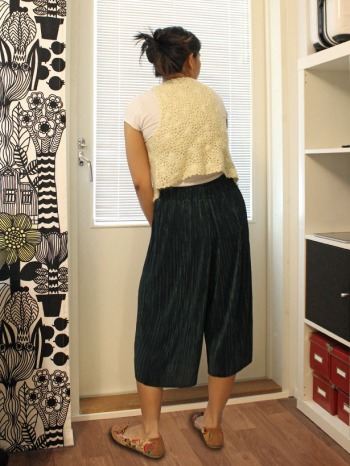 rock the look with cropped top, loose shirts, singlets, or whatever else you please. 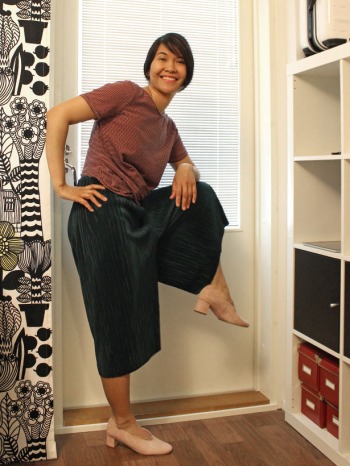 now that i’ve made these i feel like making other pleated culottes! 😁 LOL…. i can never have enough of culottes, and these pleated ones are actually quite fun and easy to make.

and btw, i sewed everything for this project only with my sewing machine. still too lazy to change my overlocker threads. ask me again next year. zzzzz. 😪

This site uses Akismet to reduce spam. Learn how your comment data is processed.