it’s that time of the year when i’ve had enough of the gloom of winter and am so ready for the flowers to start to bloom. i must say, the winter here in Finland has been quite mild this year, with the snow covering the area where i live for only a mere month at the most. usually with snow at least it would look a bit nicer. now with nothing but the cold wind & occasional rain, i just want this winter to be over already.

so it’s time to make a few blooms on my own. i meant in clothing, of course (–> not a plant person).

when i first saw this fabric, i thought there was no way anyone would buy this. a normal jersey with full on flower print is one thing, but a 2-layered jersey/organza fabric with full on flower print is like too much. but after seeing it over and over again, an idea started to shape in my mind. soon i began to see it in my sleep. that’s never a good sign. it’s a sign of the beginning of an unhealthy fabric obsession. so i quickly ended it by buying it. 😀 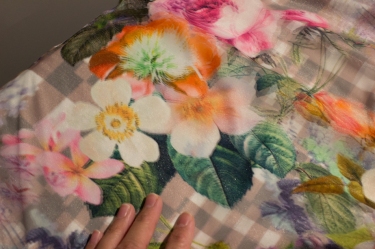 as you can see (i hope), the fabric consists of 2 layers, jersey on the bottom, organza on the top, and they’re both printed with the exact same print & repeats. they called it the 3-D fabric. cool, eh? so the idea is that you completely separate the 2 layers apart, and sew them however you like, but still align them so that when you move in it, the viewer of your fabric will see a 3-D-like print instead of a normal print.

now tell me that isn’t right up my alley???

i bought 60 cm of it. that’s right, 60 cm, try measuring that with a ruler. it’s kind of small. the width of the fabric is 150 cm. i had intended to make a sweatshirt, thinking that i would completely separate the 2 layers apart and sew them separately, not overlaying them. that’s why i got only 60 cm of it, thinking that i would put the jersey parts as the bodice and the organza parts as the sleeves. it would’ve been enough… but then i felt like that wouldn’t do justice to the fabric. there certainly wouldn’t be any 3-D effect at all!

and so, as usual, a change of plan happened. i decided to make the bodice using both layers, and then the sleeves from the organza and the cuffs & hem from the jersey. just that i had to be more creative to make my arms fit the sleeves, because the organza alone, or what was left of it, wasn’t wide enough. luckily, just last week, i saw a shirt in Monki that used strips like these on the top part of the sleeves. inspirations are everywhere, i say! (okay, i copied the idea, but it was a completely different looking shirt than my sweatshirt!). i tried it first with one sleeves… and it worked like a charm. now my arms could fit in!

for the neckline, instead of just sewing the seam allowances in like i would when sewing jersey fabrics, this time i used narrow bias tape to make it look a bit more neat (from outside, at least!). again, this bias tape used to be my late grandmum’s. *waves mentally to her in the clouds.*

this was one of those projects that didn’t need any pattern. it took me 5,5 hours from cutting the fabric to the very last stitch, which could’ve been quicker if i hadn’t thought that the organza alone was enough for the sleeves (had to backtrack a bit with the seam ripper because of this). the last 1 hour was only for finishing the seam allowances by zigzag stitch. (oh, how i hated doing this.)

i am loving the dazzling & dizzying 3-D effect on the bodice! my husband said it makes him feel like he had to put on the 3-D glasses to make the print look… well, three dimensional. 😀

and how can i not love being able to carry around these lovely blooms while it’s still half-winter? it’s the perfect way to start my spring early!

This site uses Akismet to reduce spam. Learn how your comment data is processed.